WHAT YOU NEED TO KNOW ABOUT THYROID

The thyroid gland is a butterfly-shaped endocrine gland that is normally located in the lower front of the neck. The thyroid’s job is to make thyroid hormones, which are secreted into the blood and then carried to every tissue in the body. Thyroid hormone helps the body use energy, stay warm and keep the brain, heart, muscles, and other organs working as they should. 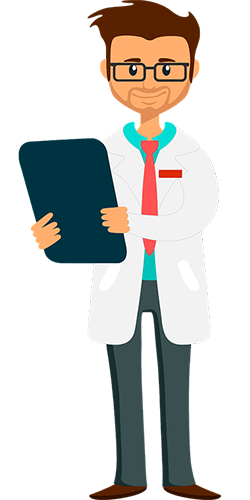 Suffering from thyroid and hypertension since a few years. But ever since Dr. Benny Negalur is treating me everything is in control. The have a foot clinic where neuropathy problems can be detected. Proper insoles are made to be worn in footwear. Advise to all friends and relatives to consult the doctor for their problem.

Visited for my Thyroid Disorder treatment. It was a very good experience. Thank you sir for giving me a tension-free life. I really recommend Dr. Vijay Negalur to my friends and family.

Visited For Diabetes, Renal Failure & Hypo Thyroid treatment. It was a good experience. Conditions was very well explained. Treatment was given along with diet and excercise.

Excessive production of the thyroid hormones is called hyperthyroidism, which is most commonly a result of Graves' disease, a toxic multinodular goitre, a solitary thyroid adenoma, or inflammation. Other causes include drug-induced excess of iodine, particularly from amiodarone, an antiarrhythmic medication; an excess caused by the preferential uptake of iodine by the thyroid following iodinated contrast imaging; or from pituitary adenomas which may cause an overproduction of thyroid stimulating hormone. Hyperthyroidism often causes a variety of non-specific symptoms including weight loss, increased appetite, insomnia, decreased tolerance of heat, tremor, palpitations, anxiety and nervousness. In some cases it can cause chest pain, diarrhoea, hair loss and muscle weakness. Such symptoms may be managed temporarily with drugs such as beta blockers. Long-term management of hyperthyroidism may include drugs that suppress thyroid function such as propylthiouracil, carbimazole and methimazole. Radioactive iodine-131 can be used to destroy thyroid tissue. Radioactive iodine is selectively taken up by the thyroid, which over time destroys the cells involved in its uptake. The chosen first-line treatment will depend on the individual and on the country where being treated. Surgery to remove the thyroid can sometimes be performed as a transoral thyroidectomy, a minimally-invasive procedure. Surgery does however carry a risk of damage to the parathyroid glands and the nerves controlling the vocal cords. If the entire thyroid gland is removed, hypothyroidism will naturally result, and thyroid hormone substitutes will be needed

An underactive thyroid gland results in hypothyroidism. Typical symptoms are abnormal weight gain, tiredness, constipation, heavy menstrual bleeding, hair loss, cold intolerance, and a slow heart rate. Iodine deficiency is the most common cause of hypothyroidism worldwide, and the autoimmune disease Hashimoto's thyroiditis is the most common cause in the developed world. Other causes include congenital abnormalities, diseases causing transient inflammation, surgical removal or radioablation of the thyroid, the drugs amiodarone and lithium, amyloidosis, and sarcoidosis. Some forms of hypothyroidism can result in myxedema and severe cases can result in myxedema coma. Hypothyroidism is managed with replacement of the hormone thyroxine. This is usually given daily as an oral supplement, and may take a few weeks to become effective. Some causes of hypothyroidism, such as Postpartum thyroiditis and Subacute thyroiditis may be transient and pass over time, and other causes such as iodine deficiency may be able to be rectified with dietary supplementation.